7-Night Charms of the Mekong

Lively Ho Chi Minh City, once known as the “Peal of the Orient,” offers a vibrant mix of old and new and provides the perfect start to your incredible journey through Vietnam and Cambodia. Cruise along the mighty Mekong, discovering a glimpse into another era; one where people still happily honor the timeless traditions passed down through the centuries from their ancestors.

Throughout your trip, immerse yourself into the culture and heritage with visits to rural villages, historic pagodas and colorful markets. Be treated to a special blessing by monks in Buddhist monastery, and witness skilled artisans who create exquisite handicrafts and delicacies. Experience all this and more on this life-enriching cruise along the Mekong.

This culinary travel adventure get to the heart of what truly embodies a destination, not only through savoring local food and wine, but through one-of-a-kind, immersive experiences that weave together a portrait of culture, tradition, history and people through food.

The 124-passenger AmaDara made her debut in 2015 and is in a class unto itself with distinct French Colonial décor and accented by Mekong artifacts made by native craftsmen. Elegantly appointed staterooms are 251 sq. ft. and suites range from 366-502 sq. ft. Staterooms and suites feature twin balconies, both a French and outside balcony, so you can enjoy the ever-changing scenery however you wish. AmaDara offers a host of added comforts and conveniences, including a spa, fitness room, gift shop, hair salon and Sun Deck pool. The stunning Saigon Lounge provides a wonderful place to meet fellow guests, and enjoy local entertainment. 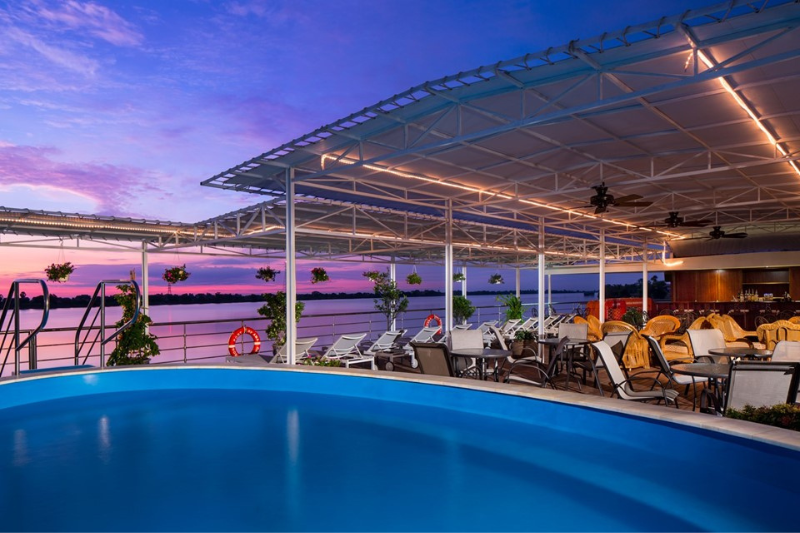 AN ARRAY OF AMENITIES

7-Night Charms of the Mekong

Transfer via motorcoach from Ho Chi Minh City to AmaDara at My Tho Port for your 7-night river cruise and then meet fellow travelers at a Welcome Dinner as the ship cruises to Cai Be. (L,D)

* All cruise only guests should meet us at Sofitel Saigon Plaza at 11:30am in Ho Chi Minh City on Embarkation day to join the transfer to the ship in My Tho Port. We recommend that you fly into Ho Chi Minh at least one day prior to embarkation; please inquire about important arrival arrangements prior to your cruise.

Take a local boat to Cai Be. You will have an opportunity to visit candy and rice paper making workshops, as well as the historic Kiet Old House. Later in the day, journey to Sa Dec, a sprawling town on the Mekong Delta, where French writer Marguerite Duras spent part of her youth. You will visit the colorful market, Cao Dai Temple and the house of Mr. Huynh Thuy Le, Duras’ Chinese paramour, which her prize-winning novel, “The Lover,” is said to be based on. (B,L,D)

Enjoy a visit to Tan Chau, a small Mekong River town unspoiled by tourism. Be treated to an authentic experience on a traditional “xe-loi” (trishaw) ride around the town, with stops at silk-making and rattan mat workshops, followed by a boat ride through the narrow channels of the Mekong River to “Evergreen Island.” Alternatively, take a boat ride to Evergreen Island and return to Tan Chau, where you will visit a rattan mat workshop. Later in the day, cruise from Vietnam to the Cambodian border en route to Phnom Penh. (B,L,D)

This morning’s excursion takes you to Cambodia’s infamous Killing Fields and the Khmer Rouge’s grim Tuol Sleng S21 detention center (Genocide Museum). Alternatively, you may wish to shop for unique treasures at the bustling yellow-colored Central Market. After lunch on board, you will explore the highlights of the city, followed by a visit to the Royal Palace, the spectacular Silver Pagoda and the National Museum, which has an outstanding collection of Khmer crafts. After returning to the ship, enjoy Khmer folk dancing performed by local children in the Saigon Lounge. (B,L,D)

Visit Oudong, Cambodia’s former royal capital from the early 17th century until 1866. Today, Oudong is a place of pilgrimage for Cambodians. While here, be treated to a memorable Buddhist Blessing Ceremony at a monastery. You may walk around Oudong’s monastery or take an active walking tour to see panoramic views of the Oudong plain. In Kampong Tralach, you will have a truly authentic excursion – an oxcart ride through a local village. Later in the day, experience Phnom Penh via a tuk ride and be enchanted by the city’s French Colonial architecture and tree-lined boulevards set amidst monumental Angkorian (B,L,D)

In the morning, set sail for Oknhatey Village. Oknhatey is the “Silk Island,” located on the lush banks of the Mekong River and known for its rich tradition of silk weaving. While here, you will visit a local elementary school and observe the traditional silk weaving, an art that has been preserved for centuries. Your cruise continues to sail to Angkor Ban. (B,L,D)

Go on a walking tour of Angkor Ban, one of the few villages in Cambodia that was not destroyed under the Khmer Rouge regime in the 1970s. Here people still live in their traditional wooden abodes and keep their old cultural traditions alive. Hundreds of wooden houses stand intact on stilts, shaded with banana trees, among the hustle and bustle of the daily agricultural on-going of the local villagers. After visiting here, the ship sets sail for Kampong Cham, where you will go on an afternoon excursion via motorcoach to the Twin Mountains, known as Phnom Pros and Phnom Srei (male and female mountains). In the annals of Khmer legend, the twin mountains were formed as the result of a competition between the men and women of an ancient Cambodian kingdom to resolve which gender would be responsible for wedding proposals. Cap the day off with a festive Farewell Dinner on board. (B,L,D)

*Based on seasonality, the port of Angkor Ban may be inaccessible from August – September. During this time, Wat Hanchey will replace Angkor Ban as the port of call.

Your cruise concludes in Kampong Cham, where you disembark and motorcoach transfer to Siem Reap. (B)

*Guests booking cruise only will be transferred from the ship to Sofitel Angkor hotel in Siem Reap. We recommend that you schedule your onward flight to depart Siem Reap after 5:30pm today to avoid potential missed connections. 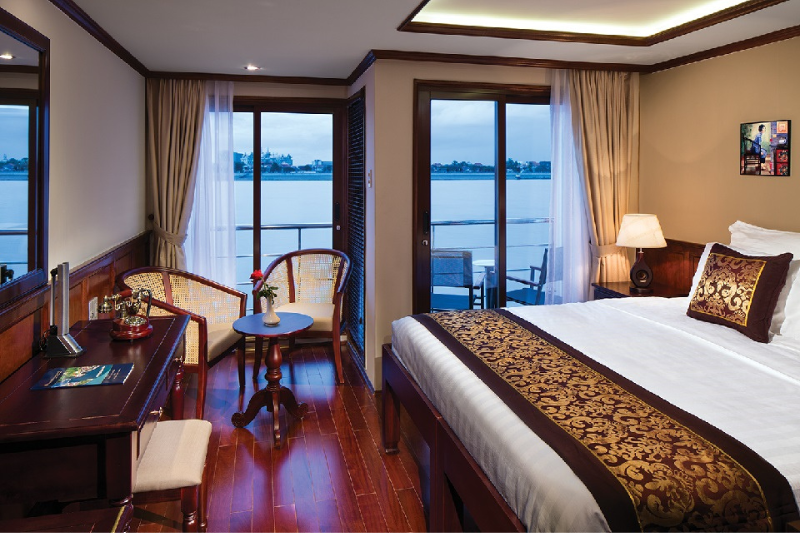 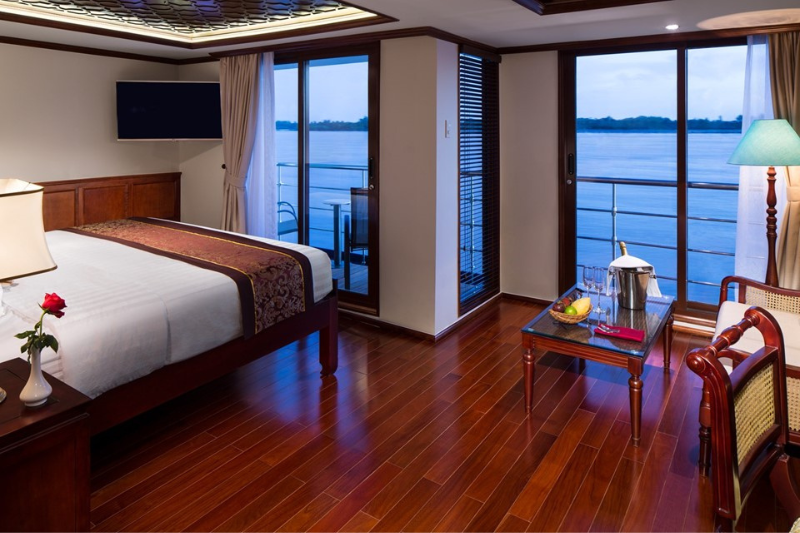 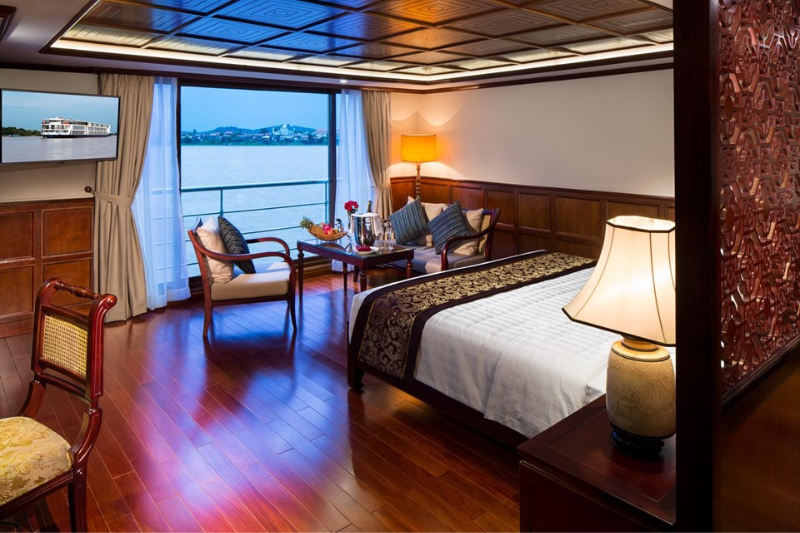 This distinctive ship is in a class of her own! AmaWaterways’ sole cruise ship on the Mekong River, the AmaDara features French Colonial décor and richly carved wood furniture inspired by the history of the region, as well as local artifacts made by native craftsmen. Air-conditioned interior corridors lead to spacious staterooms and suites, most featuring twin balconies that invite the ever-changing scenery of Southeast Asia inside.

On board, the AmaDara caters to your every whim, with massage rooms, fitness room, gift shop, hair salon and sun-deck pool. Her stunning Saigon Lounge provides respite by day and unites guests over intriguing local entertainment by night. Savor authentic regional delicacies and Western cuisine in the Main Restaurant or dine at The Chef’s Table specialty restaurant; and throughout your cruise, be treated to unlimited complimentary wine with lunch and dinner, as well as house brand spirits, local beer and soft drinks throughout your cruise. 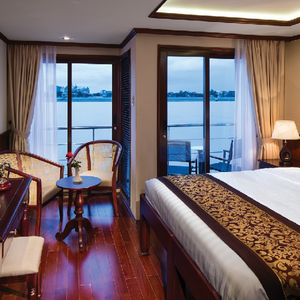 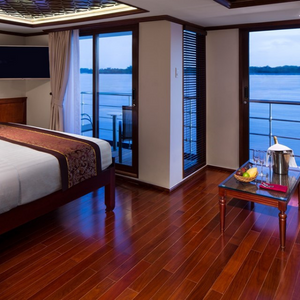 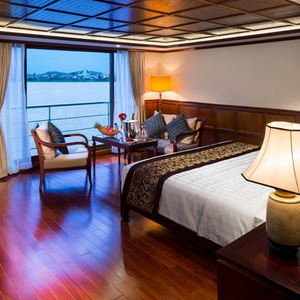 Our ships in Europe are members of La Chaîne des Rôtisseurs – a prestigious international culinary society – and with good reason. Our expert chefs craft menus that feature exquisite, locally-sourced cuisine as well as traditional Western offerings. We are the only river cruise line that has The Chef’s Table, an intimate specialty restaurant included in the price of the cruise where you can watch the chef prepare a lavish multi-course menu right in front of you. Each dinner at The Chef’s Table is served with complimentary hand-selected local reds and whites from Europe’s renowned wine regions. There’s also sparkling wine and fresh juice with breakfast, menu service during lunch, as well as delicious tapas and snacks in the Main Lounge between meals. All onboard dining, as well as unlimited wine and beer with lunch and dinner, is included so you can indulge whenever and however you’d like.
Join a few of your fellow travelers at The Chef’s Table, where the kitchen — usually hidden — becomes part of the entertainment. You’ll have the opportunity to watch the chef prepare a special multi-course meal right in front of you. The menu here is unique, making this a truly distinct gastronomic experience. Indulge in delectable dishes served with unlimited fine wines, hand-selected just for this dinner. It is the only venue of its kind on the river.
You will enjoy complimentary, unlimited wine, beer and soft drinks during lunch and dinner, as well as sparkling wine and fresh-squeezed juices during breakfast. We hand pick only the highest quality wines and pair them with our cuisine. You’ll have the chance to savor different wines on each day of your cruise.

Our reds and whites are of the highest quality, and come from local wineries and vineyards. It is a fantastic way to savor the flavor of each region you are visiting. Rieslings from the Wachau Valley, Sauternes in Bordeaux and Calvados from Normandy are just a few examples of how you can indulge.

If more than 90 days prior to departure, a $400 per person deposit is due to confirm booking, of which, $200 per person is non-refundable. Verbal confirmation of reservations can be made over the phone, by depositing using a credit card. Reservations without deposit are not considered firm and may be canceled once the option has expired without any notice. Furthermore, once a deposit has been received, normal cancellation fees will apply.
The fear of missing (FOMO) is a horrible feeling…but losing your hard earned money you paid for your vacation is far worse. Because all of Wine Lovers Group d/b/a Be Relaxed Destinations, LLC are non-refundable and non-transferable, travel insurance is therefore highly recommended for this trip. Your premium is related to your trip cost, so you don’t have to worry about being over-insured. Click the link for our preferred travel insurance vendor list. If you choose not to purchase travel insurance you will be required to complete a form declining this options. This is to ensure you understand the repercussion of not purchasing travel insurance.
All cancellations must be received in writing. Penalties are as follows. PTD = Prior to Departure: 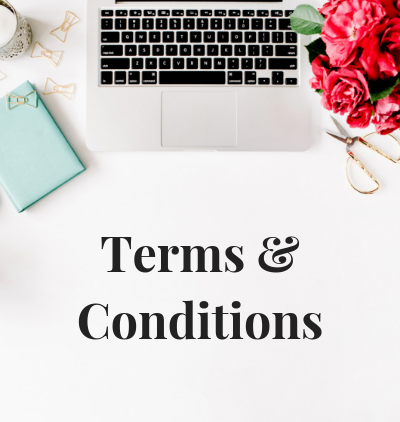 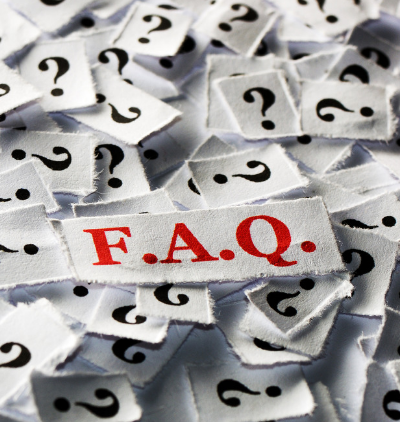 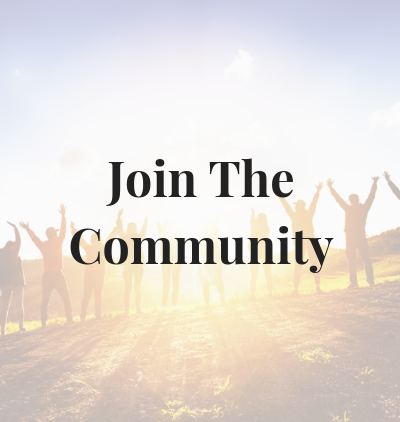 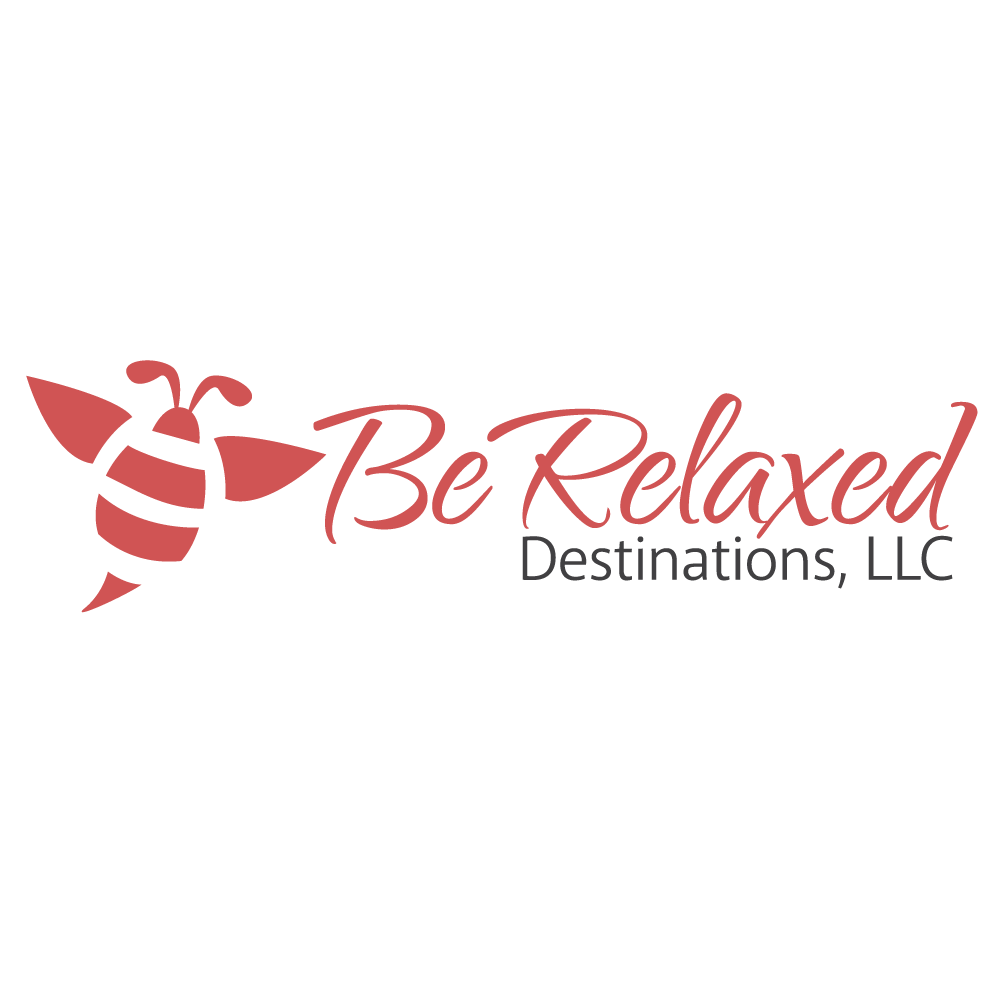